A total of 9 acres including a barn and an office building. The vineyard is divided into 2 x 4 acre blocks which can be irrigated separately. The front block has mostly the original plantings back from the very early 1930 ties. The back block was re planted in 1950 – some single vines of Tokay can be found as well

The grapes never had a home in a single vineyard label. The grapes were mostly sold off to larger producers for blending purposes (for the last 10 years) – no records from earlier days. The vineyard was trained to produce large quantities of grapes – it almost killed the vines – often the weeds were taller than the vines. The current owners were ready to pull the field out.

Edison and Johnnye Shell purchased the lot around 1947 after he returned from WWII. At the very early days, there were Cherry trees along the canal (back block). The front block was well established with Carignan by then.

Oral history is, a family named Roca were owners. Evidence of stills were in the barn pit and the house basement. The owner’s applied for a winery permit in 1940. (documents of application do exist)

The barn pit was there when the property was purchased by the Shell’s. Neighbor next door told stories that during prohibition bootleg booze was sold from there. Cars turned off lights as they approached at night, pulled in and left. That was sometimes between 1920-1930. The oldest vines were probably producing during that time.

Bigger clusters with smaller berries were harvested early September – there were no issues with rot or any other diseases. The vineyard is recovering well from the performed adjustments. Quality of fruit is great. First vintage of a singe vineyard ancient vine Carignan will be released summer 2023.

Notes about the history you can read above.

Markus wine co was approached in early 2021 to help grow quality fruit and open this vineyard up to a new market. The vineyard was immediately re pruned , heavy suckering/shoot thinning did occur and dropping extra fruit did take place in July.

Grapes were locally used for markus wine co production. A small portion was sold to wineries out of state.

Sandy loam soil holds water pretty nice – there is an existing deep root system since the block was dry farmed in the early years, then furrow irrigated and now is set up on drip.

Free standing old vines with no trellis system makes the vines look like tree’s during summer. 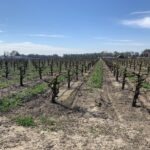 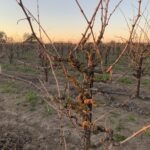